With his arms outstretched to counterbalance the occasional wobble, Spencer planted his feet on top of the cinder block wall that lined the sidewalk in front of the school on his first day of kindergarten. The knees of his freshly pressed jeans were not yet torn. His tennis shoes were not yet scuffed. Golden flecks in his tousled blond curls glinted in the morning sunlight. Heel-to-toe, heel-to-toe, he inched across the wall, until he toppled to the ground in front of his mother, causing her to stumble. In spite of his mother's repeated admonitions for him to walk beside her like a "normal person," Spencer hopped back on the wall and resumed his task with the determination of a five-year-old on a mission.

“For heaven’s sake, Spencer, what are you doing?” Tara asked.

“Practicing my tightrope walking,” he explained. “In case this school thing doesn’t work out, maybe I can join the circus.”

That’s Spencer.  He always has a Plan B. I suppose with the upheaval and disappointments he experienced when his parents divorced and after his mother died, it is not unexpected that he would  anticipate the worst and consider the next best option, thinking when, not if, he had to move on.

“I guess if this doesn’t work out,” he said at the breakfast table one morning shortly after becoming our 'double-son'--a grandchild by birth, our son by adoption--“maybe I can go live with Uncle Nevin.”

Sam responded in his usual get-to-the-point-in-as-few-word-as-possible way. “Oh no.  This is your home, Buddy. You are not going anywhere.”

I recalled the words of my lawyer-friend on the day of Tara’s funeral when Spencer was taken away, “There comes a time,” he said, “when a boy needs to find out for himself what kind of man his father is.”* 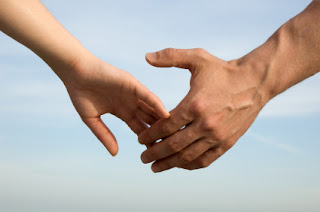 It didn’t take Spencer long to learn what kind of man Sam is.

"I know sometimes we get on each other’s nerves a bit," Spencer said in a handwritten note to Sam. "But for every one of those times there are 100’s more that make those seem bearable.  I just want to thank you and say Happy Father’s Day. I want you to enjoy it and take pride in the fact that you’ve earned it in my book.  I love you so very much, and you are a pretty cool grandfather.  Spencer”

With humbleness and gratitude, I am pleased to report that with "cool" Sam as their father, and in spite of the fact that we do occasionally get on each other’s nerves, all of my children have apparently found life in our household to be, for the most part, “bearable.”  And thankfully, at least for now, no one has run away to the circus.

“I cannot think of any need in childhood as strong as the need for a father’s protection.” ~Sigmund Freud

“My father didn’t tell me how to live; he lived, and let me watch him do it.”~Clarence B. Kelland

“Often the only thing a child can remember about an adult in later years, when he or she is grown, is whether or not that person was kind. ~Billy Graham

-Is there someone who has modeled compassion and loyalty for me? What did I learned from them?
-What is my experience of “father?” Does that experience strengthen or hinder my relationship with God and my response to God as “father?”