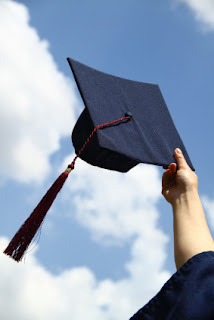 High school graduation ceremonies strike terror in my heart.  It happens every time I watch one of my children receive their “passport to the future,” as almost every graduation speaker has described that cherished piece of paper, representing twelve years of homework assignments that may or may not have been turned in. I listened as Spencer and his classmates were reminded in lofty words that it is their responsibility to build on the “firm foundation laid by teachers and parents.” The world was "now in their hands."

That was a scary thought. I don’t know how other parents felt hearing that declaration, but I broke into a cold sweat.  I wanted to shout, “Wait! He’s not ready.  I’m not ready! I haven’t done enough!”

"There is still time," I told myself.


I still had the summer to bombard Spencer with warnings and inundate him with last minute words of wisdom.  I reviewed my mental checklist:
You would think the boy was trekking to the hinterlands, never again to be seen in civilized society, with only minutes to complete wilderness survival training, rather than going away to college. As long as there is frozen pizza, I consoled myself, I suppose he won’t have to forage for roots and berries.


Calm down, girl, I thought. Breathe! He's going to be fine and so are you. You're just having “end-of-an-error” jitters. I reminded myself I had survived children leaving home before. I wondered what it would be like when Spencer left.


When Spencer’s mom Tara left for college, tears flowed every time I passed the door to her empty bedroom. When Nevin's turn came to fly the nest, I wasted no time lamenting his departure. I began crying over the kitchen sink when he was still a junior in high school.


Brynnan was the last to leave. I dreaded the moment of separation. We gathered in the garden at Rhodes College with other parents and students for the culmination of a two-day, freshman orientation that I think was more to help the parents get used to the idea of college than the students. The college president knowing the potential for soggy parental meltdown, allowed no time for tearful good-byes. He not-unkindly, but briskly announced from the podium, “Parents, please go now. As the old saying goes, ‘How are we gonna miss you, if you won’t ever leave’?”


I reached toward Brynnan for a last, poignant embrace with a lump in my throat and tears burning my eyes, but she had already turned. “See ya, Mom,” she called over her shoulder. “I've gotta go check on Mrs. Summerford.  She looks upset.”


Sam smiled and put his arm around me, "Well, Mom. I guess that's it. It's just you and me now." And with that declaration, we entered the empty nest.

Soon Spencer would leave for college and another season of child-rearing would end. We would send him off with our love and fervent prayers for God’s protection, and once again Sam and I would be together, alone in the house, just the two of us.


The ceremony ended and hundreds of cheering teenagers tossed mortar boards into the air. I'm glad I remembered the empty-nest is not without its advantages, and being with Sam is a very good thing.
I lay awake that night, listening for Spencer's footsteps on the stairs and his voice calling, "I'm home!" I added to my checklist:
Spencer ambled into the kitchen the following day for a post-Noon breakfast. Perhaps I should have waited until he was fully awake or at least until his head was out of the refrigerator before  initiating a moment of sentimentality.


"Yea, I know," he said with a poignant sigh as he retrieved a carton of chocolate ice cream from the freezer.

“You are the bows from which your children as living arrow are sent forth. The archer sees the mark upon the path of the infinite, and He bends you with His might that His arrows may go swift and far.  Let your bending in the archer’s hand be for gladness; For even as He loves the arrow that flies, so He loves also the bow that is stable.”~Kahlil Gibran

“For the Lord is good. His unfailing love continues forever, and his faithfulness continues to each generation.”~Psalm 100:5

-Change is a constant part of life.  What changes have I experienced?
-How would I describe the seasons of my life? Are there some that have been more difficult than others? Why? Why not?
-Is there anything I have found to be helpful in negotiating transitions? What would I want to share?
-Have I found grace in new beginnings?
-What is my prayer for this season in my life?

A Prayer for changing times:

Beloved One, so quickly has this season come to an end.  As I prepare to conclude this season now grown old, may this time be alive with contentment, completion and rest. As the winds carry songs of harvest gratitude, may my heart join the chorus, singing praise for you.  May the growing presence of a new beginning speak of the bounty of your love, and may the fruits of your grace be stored in my heart.